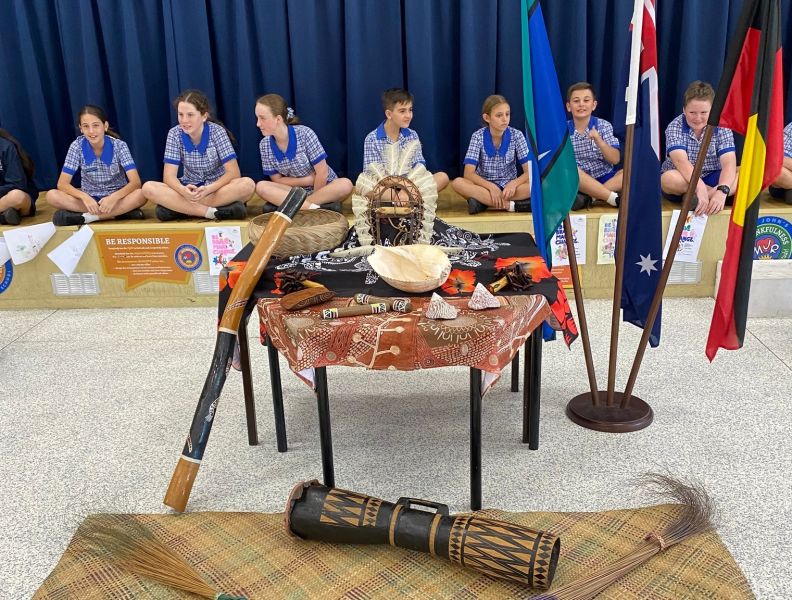 Footprint painting, tree planting, liturgies, ceremonies, special lessons and a wide range of awareness raising activities were some of the ways our Catholic kindergartens, primary schools and colleges marked National Sorry Day (May 26) and National Reconciliation Week (May 27 – June 3) throughout the diocese.

The deeply meaningful and respectful events and activities held during this special time reflected an authentic commitment to achieving Reconciliation for the benefit of all Australians, according to Diocesan Director, Leesa Jeffcoat.

“It is my firm belief that our communities can be great agents of change and help facilitate mutual understandings and deeper appreciation for our shared histories, cultures and achievements with a view to a more just and inclusive future,” Miss Jeffcoat said.

Set aside as a day of remembrance and reflection, National Sorry Day acknowledges Aboriginal and Torres Strait Islander people who were forcibly removed from their families and communities, now known as ‘The Stolen Generation”. It falls on May 26 each year, the anniversary of the day the Bringing Them Home report was tabled in Parliament in 1997 as well as the issuing of the Uluru Statement of the Heart two decades later.

National Reconciliation Week immediately follows National Sorry Day as a time for all Australian to reflect and critically examine their contribution to the journey of reconciliation and building a better future.

The Week concludes on 3 June, Mabo Day, the anniversary of the 1992 Mabo Decision in the High Court of Australia which overturned the ‘terra nullius’ declaration, claiming Australia was once land that belonged to no-one. The Native Title Act was introduced the following year, acknowledging land rights for Aboriginal and Torres Strait Islander people.

“These are important and significant occasions and pivotal in our country’s history,” Mis Jeffcoat said.

“I thank all in our Catholic Education communities who intentionally work toward a better future for all Australians,” Miss Jeffcoat said.

“He retained a close association with CBC and subsequently The Cathedral College, visiting on quite a number of occasions. He would leave a lasting impression on staff and students he met, such was his presence,” Miss Jeffcoat said.

Sir Gerard’s last visit to the College was in 2016 to attend a liturgy for the Opening of the Law Year.

“A warm and compassionate man of the highest integrity, he will be remembered as a champion of justice and equality for all Australians,” Miss Jeffcoat said.