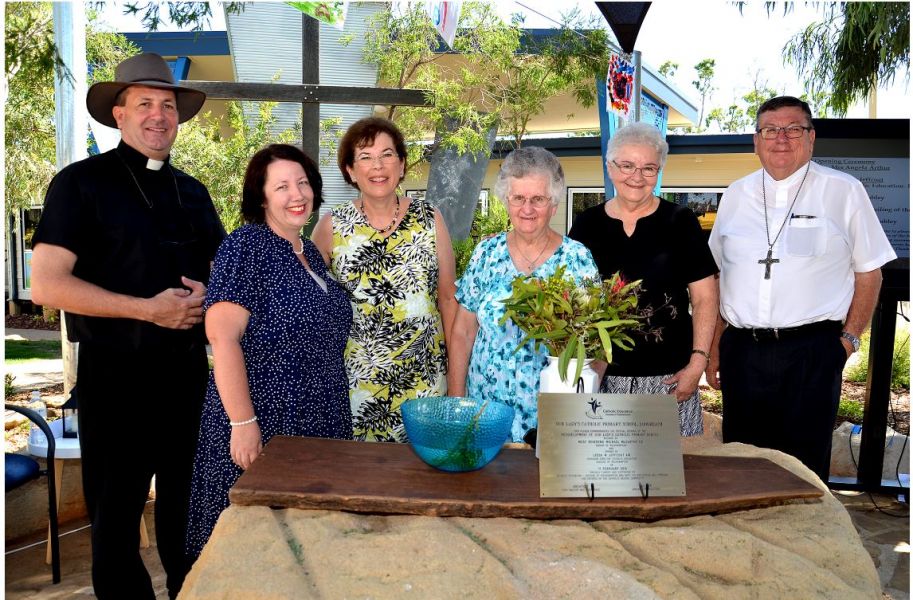 There were smiles all round at Our Lady’s Catholic Primary School on Monday (February 11) as the community celebrated the official Blessing and Opening of the school’s major redevelopments completed over the past 12 months.

The Most Reverend Michael McCarty DD, Catholic Bishop of Rockhampton conducted the blessing and Rockhampton Catholic Education Director Leesa Jeffcoat opened the new facilities with Parish Priest, Fr Bill Senn, also in attendance together with members of the school and wider community.

The ceremony celebrated the culmination of the three-stage project which saw initial planning commence at the end of 2015 and the first demolition works underway in December 2017.

Our Lady’s Principal Mrs Tanya Lambley said the educational needs of current and future students had been very well catered for and the extensive project had provided a well-needed boost to the whole Longreach community during very difficult times.

“This extensive project represents a significant investment in the future of our school and our town. At a time of great uncertainty and hardship for so many in our community, our brand new facilities have provided a sense of stability and a great avenue of hope,” Mrs Lambley said.

The project was completed on time by Emerald based company, Cardav Construction together with local contractors to deliver modern educational teaching facilities for a full one stream primary school from Prep through to Year 6.

“The design is very much future focussed. It features a technology rich environment to support curriculum delivery and flexible learning opportunities. We have beautiful landscaped surrounds and shaded outdoor learning and gathering spaces. Major refurbishments to the library, multipurpose centre and Administration centre have also been completed,” Mrs Lambley said.

Rockhampton Catholic Education Director Leesa Jeffcoat said this latest investment consolidated Our Lady’s future and ensured the continuation of Catholic schooling in the community which commenced well over a century ago.

“We would like to take this opportunity to thank the Longreach community for their ongoing support for Our Lady’s Catholic Primary School and the many organisations and individuals who partnered with us to deliver this significant capital project for the school, parish and Longreach district,” Miss Jeffcoat said.
Catholic Education commenced in Longreach in 1900 with the arrival of the Presentation Sisters who opened a church-school and then two years later opened Our Lady’s College as a High School for local pupils.

In 1986 Our Lady’s College began operations as a Year 1-10 school with the Secondary closing at the end of 1994. The preschool opened in 1992 and 10 years later the school became known as Our Lady’s School. Now a Prep to Year 6 School it operates under the name, Our Lady’s Catholic Primary School.