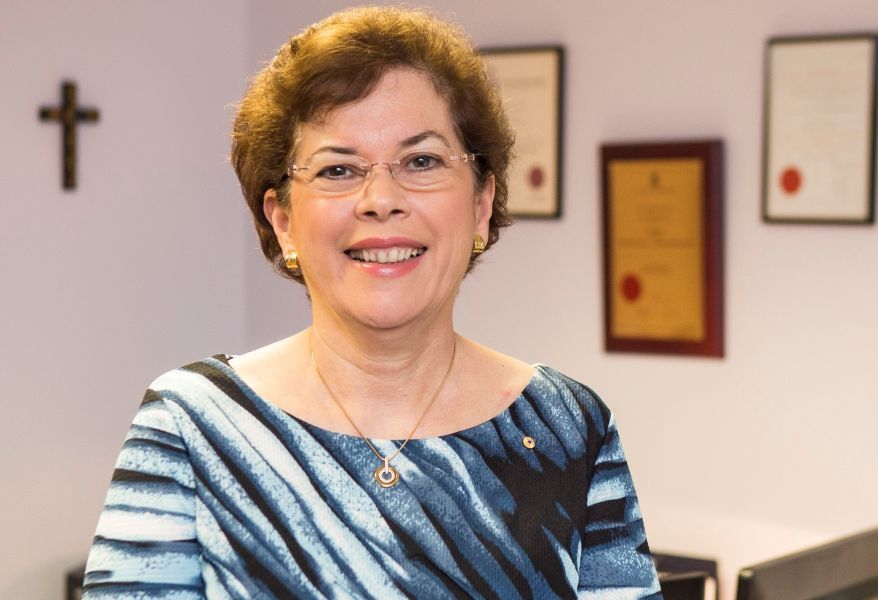 Catholic Education Diocesan Director, Leesa Jeffcoat AM has been recognised for serving 20 years in the role having been initially appointed Director by then Bishop Brian Heenan on 2 July 2001 and re-appointed by Bishop Michael McCarthy soon after he became Bishop in 2014.

Staff from the Catholic Education Office in Rockhampton paid tribute to Leesa at a surprise function held at the Kevin Castles Centre on the first day of Term Three which featured the reading of messages of congratulations from friends and colleagues.

Leading the tributes to Leesa was Bishop Michael McCarthy who acknowledged her dedicated service and faith-filled leadership saying, “Catholic Education in this Diocese has continued to thrive and be at the forefront of innovation, technology, facilities and education all the while maintaining our key focus of Catholic education.”

“Your personal commitment to the significance of Catholic education cannot be questioned. You are a woman of great faith yourself which reflects in your leadership, and you look to better the lives of all who come through our facilities,” Bishop McCarthy stated.

Among others who warmly congratulated Leesa on her 20 years of service as Diocesan Director was former Director, Mr Joe McCorley.

Mr McCorley said that Leesa had demonstrated strong and capable leadership and was respected by all the Catholic school communities throughout the Diocese.

Holy Spirit Provincial Seminary Rector and former Diocesan Administrator (Diocese of Rockhampton) Monsignor John Grace commented in his letter of congratulations, “Leesa is both a woman of principle and indeed a principal at the coal face of teaching and learning. In all endeavours Leesa shines in competence with courageous initiative.”

Many of those who sent messages of congratulations noted the respect and admiration that Leesa has always showed to those who had pioneered Catholic Education in this Diocese. People spoke of the excellent relationships Leesa enjoys with priests and members of Religious Congregations and her sincere appreciation of their significant and ongoing contribution to the development of Catholic Education in the Diocese.

During her time as Director, Leesa has overseen the opening of 10 kindergartens, 3 primary schools and next year a new secondary school, Catherine McAuley College will be opened in Mackay.  Leesa has had no higher priority than the protection of the children entrusted to the care of Catholic schools and as well she has championed the advancement of equitable educational opportunities for Aboriginal and Torres Strait Islander students and for families in rural and remote areas.

Speaking at the function, Leesa said she was very touched by the many messages of congratulations she received and by the thoughtfulness of those who had organized the surprise celebration.

“I have been blessed to work with some truly special people and I give thanks to God for the gift they have been to me during my years of service in the Ministry of Catholic Education” Leesa said.

“I am humbled and very moved by the kind and affirming words from so many people who have been a significant part of my journey over the past two decades,” Leesa said.

Leesa also offered her heartfelt thanks to all who had been there for her through the joyous times, the challenging times and the sad times.

“It has been an honour and a privilege to serve each day of the past 20 years with dedicated and faith-filled people to help foster in the students entrusted to our care a love of God, a love of others, a love of learning and a love of the world around us,” Leesa said.