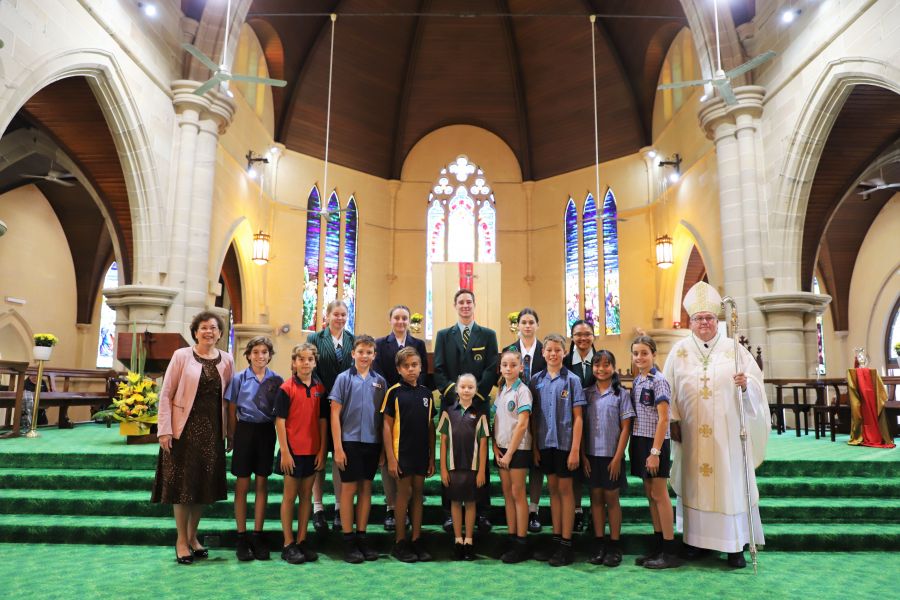 2021 is a significant year for Catholic Education in Australia as this year marks 200 years since the first Catholic school was founded in Parramatta, NSW.

On Monday 24 May, the solemnity of Our Lady Help of Christians, a capacity congregation gathered at St Joseph’s Cathedral to celebrate Mass with Bishop Michael McCarthy presiding. Representatives from Catholic schools and colleges in Rockhampton, Yeppoon, Gracemere, Gladstone and Biloela were in attendance.

The Mass was livestreamed with many staff, students and families from Catholic schools and parishes in regional and rural centres across the Diocese tuning in to celebrate this significant milestone.

A great many people worked with passion and commitment to make the Mass a wonderful celebration of the Feast of Our Lady Help of Christians and of all that Catholic Education has contributed to Australia over the last two centuries, according to Catholic Education Diocesan Director Leesa Jeffcoat.

“The Mass was a great opportunity to celebrate the gift that Catholic Education has been to Australia for the past 200 years and to honour and recognise all who have been a part of the Catholic Education story,” Miss Jeffcoat said.

Banners representing every college, school and kindergarten in the diocese were processed into the Cathedral to commence the celebration accompanied by the Opening Song - John Burland’s Mary Help of Christians.

“Students in our Catholic School and College communities had featured in a delightful, heart-warming video performing this beautiful song which was produced to help commemorate this significant occasion,” Miss Jeffcoat said.

Miss Jeffcoat said in addition to recognizing and thanking all who had contributed to Catholic education in Australia, the Mass was an opportunity to pray that God will continue to bless the Ministry and all who serve in it today, tomorrow and into the future.

Catholic Education Diocesan Director Leesa Jeffcoat (left) and Bishop Michael McCarthy (right) are joined by a student representative from each of the schools attending a special Mass at St Joseph’s Cathedral Rockhampton celebrating 200 Years of Catholic Education in Australia on May 24, the feast of Our Lady Help of Christians.