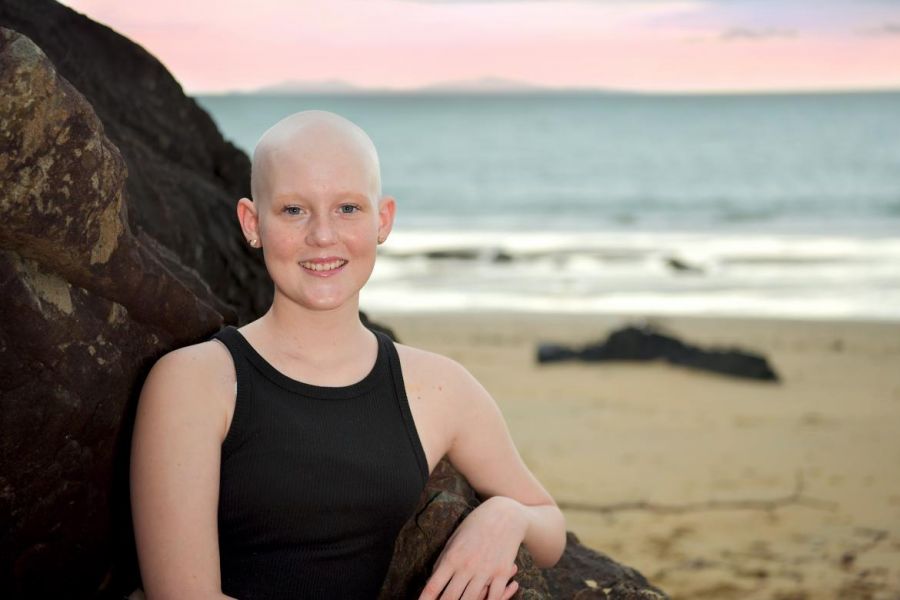 The city centre billboard hung on the wall of the Mackay City Fire Station and was on display for several months in the lead up to the telethon which aired in April.

Khiana’s mother, MacKillop Catholic Primary School Principal, Allison Blakey, said she was immensely proud of her courageous daughter who didn’t hesitate to lend her support to the Children’s Hospital Foundation.

“The Foundation was a wonderful support for us during Khiana’s cancer journey. They do outstanding work,” Mrs Blakey said.

“I’m very proud of Khiana. Losing her hair was extremely difficult, not once, but twice during her treatment. Of all the awful side-effects of chemotherapy, radiation and multiple surgeries, losing her hair was the thing she found most difficult to deal with,” Mrs Blakey said.

“Ultimately Khiana’s endorsement will mean more resources for families and children who need support. After all she had been through, I think she is quite remarkable,” Miss Jeffcoat said.

Miss Jeffcoat also noted the wonderful support of Ronald MacDonald House Charities provided to Khiana and her family and to other Catholic Education families facing traumatic circumstances with injured and seriously ill children.

“RMHC provides extraordinary support for families experiencing anxious and difficult times -accommodating families close to the hospital while their child receives the medical care they need, as well as providing a range of other programs and initiatives to help reduce the impact of their child’s serious illness or injury,” Miss Jeffcoat said.

“Over recent times we have developed a close working relationship with RMHC in response to the great support offered to our staff members and their families. Our Catholic Education Office opted to donate funds raised from our Term Two raffles last year to support their wonderful work, and we will again look to raise awareness and provide further assistance in the future,” Miss Jeffcoat said.

For further information or to make a donation please follow the links to Ronald MacDonald House Charities  and Children’s Hospital Foundation .